When one thinks of India, several things may come to mind: curry, yoga, saris, Bollywood. But probably the number one symbol to represent the subcontinent is one of the world’s greatest monuments: the Taj Mahal.

Built in the 1600s of white marble, the Taj was built by the Mughal emperor Shah Jahan to house the remains of his favorite wife, Mumtaz Mahal. And I’m not going to lie, it is every bit as beautiful as it looks in pictures and even more stunning in person. 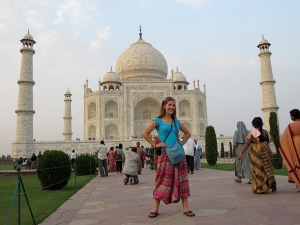 Me in front of the Taj Mahal

Imagine my surprise to find that arguably the world’s most beautiful piece of architecture is housed in the world’s most un-beautiful city: Agra. Yes, apparently none of the several million dollars generated each year in revenue by the Taj goes to maintaining the charming metropolis surrounding it.

When I first entered Agra, the prospect of seeing the Taj plus the lack of sleep from our lively bus ride the night before (I swear I spent at least four minutes airbound) left me too excited, if not loopy, to notice much of my surroundings. It wasn’t until after sunset when we left the Taj and my buzz started to wear down that I realized how much of a dump we were in.

Now, to be fair, my friends and I arrived in Agra the night before Deepavali, one of India’s most important holidays, so perhaps the city was a bit rowdier and crowded than normal. We had decided to make the trip for the day and to try to catch a night train to Varanasi that evening.

After the Taj closed, we went to grab dinner before heading to the train station, and I realized that my attempts to stay hydrated in the Indian heat were catching up with me. After ordering, I asked to use the bathroom but was told it was out or order, so I told my friends I was heading out to find a toilet and would be back soon.

As I walked down the crowded road, dodging people, motorbikes and aggressive salesmen, I found tons of flowers, incense, souvenirs and street food. What I did not find were toilets.

Somehow in a city of 1.3 million inhabitants plus about 3 million tourists annually, there are approximately five working bathrooms, none of which were located on the street where I was having dinner. In my 15-minute walk down the road, I found only one other restaurant, containing a “toilet” consisting of a white basin on the floor with a canal that apparently led to somewhere (I swear, I didn’t see a hole anywhere!).

Clearly, this was not going to happen.

After that failed attempt I continued my walk…and walked…and walked…and finally asked one of the local craft sellers for the nearest bathroom. First, he said there weren’t any, but after seeing my desperation proceeded to lead me to a dark alley and pointed to the side of the road… I smiled politely and thanked him but dashed out the minute he left.

Again, this was not going to happen.

I gave up my bathroom attempts and headed back to the restaurant where, after scarfing down my now-cold meal, my friends and I headed to the train station to try our luck at last-minute tickets.

“The train station,” I thought, “I’ll find a decent toilet there.” My sagging little bladder filled with hope.

Turns out, finding a clean toilet at the Agra train station is just as futile as getting last-minute train tickets during Deepavali.

My first attempt at relief was in the bathroom located in the first waiting room we tried at the station. Upon entering, my nostrils filled with an overwhelming smell of human excrement. As I followed my nose, I found the source of the aroma from the large toilet stall in the back, containing your choice of a Western commode or an Asian squatter, neither of which had clearly ever been cleaned a day in their lives. 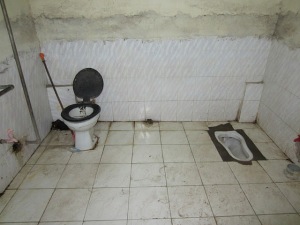 Your choice of a Western commode or an Asian squatter

I groaned but crossed my fingers and my legs and hoped to have better luck with the waiting room down the platform.

This one looked much more promising. The waiting room was smaller but empty and was a welcome relief from the noise outside. It wasn’t until I opened the door to the bathroom and discovered human feces on the ground that even my bladder began to groan.

The poo wasn’t even contained in the stall! Not only had the lady just missed the hole in the Asian squatter, but she had apparently not realized she wasn’t finished when she walked out the door and had continued her excretions on the floor outside the stall. The sight of the rat that walked through the waiting room right after just added to the enthusiasm of my big, “hell no!” 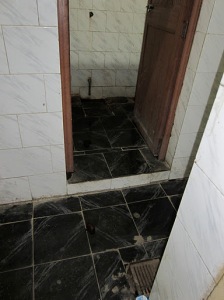 Look closely and you can find the poo in two different locations.

Eventually, I managed to find an acceptable toilet in the station that wasn’t covered in human excrement and didn’t make me want to vomit upon entrance. (My toilet snobbery, however, would continue throughout India, eventually earning me the nickname “Camel Pee”…)

In the end, I had Agra to thank for providing me with two memorable experiences that will stay with me for a lifetime.