As mentioned in my first Myanmar post, I was a bit nervous traveling to a country whose government has such a violent and oppressive reputation.

And of course, they would be having by-elections during my visit.

While everybody said election time should be safe, I wasn’t really sure what to expect. This would be the third time in more than 20 years Myanmar had a democratic election, and only two years since the military government transformed into a “civilian” government, still led by former military men. Furthermore, this would be the first time Aung Sang Suu Kyi’s National League for Democracy (NLD) party would be running for office since “The Lady” was put under house arrest in 1989 and her party’s landslide 1990 election victory nullified by the military junta.

In the weeks leading up to the election, we saw campaigning throughout Myanmar, and it was fascinating. Parades of trucks drove through small towns bearing loudspeakers and loads of people, all wearing NLD t-shirts and all with big smiles on their faces. Campaign tables sold t-shirts, buttons and flags bearing the red NLD slogan and faces of Aung Sang Suu Kyi, as well as her father General Aung Sang, heralded by many as the father of modern day Myanmar. 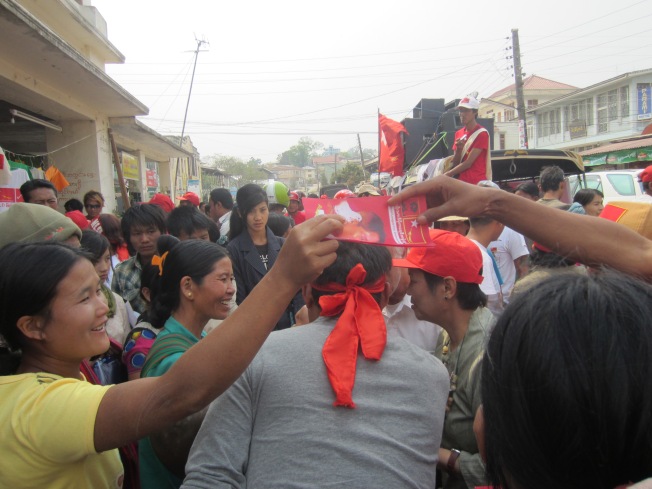 As the world watched (foreign observers being allowed in for the first time), the NLD succeeded in winning 43 out of the 44 seats it contested and largely without problems. While the win only gives the NLD a small minority in Myanmar’s still military party-dominated parliament, it does give them a foot in the door and a voice unheard for the past 20 years.

Unfortunately, I was caught in a 12-hour bus to Yangon on the day following elections, but when I did finally reach the city I still found plenty of activity happening in the NLD headquarters. While the immediate celebrations had finished, dozens of people still loitered both inside and outside the building, while supporters continued to sell NLD t-shirts and other items outside. In fact, vendors all throughout the city were selling NLD t-shirts, something that would have been unheard of, even illegal, just a few months beforehand.

NLD supporters outside the party’s headquarters in Yangon

While speaking with supporters outside, one girl invited me to an election celebration to be held the following day in a town nearby. Between her broken English and our rushed conversation, I really had only a 30 percent idea of what was actually going on the next day. All I knew was I had an address scribbled on a piece of paper written in English and Burmese with instructions to arrive around 9 a.m. the next morning.

Somehow the next day, I managed to convince my friend Gloria plus two random strangers to share a taxi with me to the middle of nowhere to take part in a random event I vaguely understood. And the experience was unforgettable.

An hour from Yangon, we found ourselves in North Okkalapa, a small, poor village and hometown of Naing Ngan Lin, the NLD winner of Dakkina Thiri, one of the constituencies of Myanmar’s capital city, Nay Pyi Taw. We had been invited to his post-election party.

When we arrived in the town, Naing Ngan Lin and about 50 friends, family and supporters were eating and celebrating in a small restaurant in town. As the only foreigners, we were quickly made the center of attention, with everyone, including Naing Ngan Lin himself, eager to speak with us.

Naing Ngan Lin and his family

He told me he had been involved in politics for the past seven years, though mostly as part of a separate democratic party, the United Front of Burmese Activists for Democracy, before choosing to join the NLD.

His main contribution, however, were his schools.

Walking through Northokkalapa, rundown houses stand on stilts standing above mucky water and garbage-covered dirt, while children and stray animals run freely throughout. While money was clearly an issue, one woman told me that many children could not attend school, because they had to stay home and take care of their younger brothers and sisters while both of their parents were at work.

Naing Ngan Lin’s goal had been to build free schools for children who could not afford to attend the government schools, and he had created five schools to date.

But Naing Ngan Lin’s political activities had made him a suspicious figure by the government for years. In fact, he told me he had been arrested twice, first in 2006 for suspicions that a foreign teacher had been illegally giving scholarships for his school (which Naing Ngan Lin said was false) and second in 2009 for “no reason” one day outside an Internet café. Naing Ngan Lin said, though treated well, he was detained for two months the second time and only released after American Senator Jim Webb’s high profile visit to the country in 2009.

Even during his legal campaign for his NLD seat, Naing Ngan Lin told me two of his campaign workers had been threatened, though none of that seemed to faze him. His sights were set on the future. Now, he said, his constituency had two main problems: access to clean water and consistent electricity, and he told me he planned to build a new well.

Leaving Northokkalapa, I was grateful I had taken that random taxi to the middle of nowhere and gotten just a little piece of what these historic elections are like for people on a more intimate level.

While it’s only been a few months since the elections, things have already started changing for Myanmar, with both the European Union and the United States lifting some of its sanctions against them. Though only small steps so far, I will be very eager to see what happens next…