Before doing any research into Laos, I knew about one thing: tubing. While I’m not a big party girl, the notorious tube ride through the bar-studded Nam Song river in Vang Vieng intrigued me, and I knew I had to try it out.

While Vientiane may be the capital of Laos, Vang Vieng is definitely the country’s party capital and one of the top party destinations in all of Southeast Asia. While just a small town in the middle of nowhere, travelers flock to Vang Vieng for the cheap alcohol, easy drugs (think marijuana, mushrooms and opium) and a general outlet for unrestrained hedonism, which in the end boils down to one main event: tubing.

Ready with our tubes at the start of the river

The process is very simple. Starting around noon, you head to the town’s lone tube provider where you register your name and pay 55,000 kip (about $7) plus a 60,000 kip ($7.50) deposit for an inflated inner tube. A covered pick-up truck then drops you off at the start of the river where you have until 6 p. m. to make it back down to return the tube and retrieve your deposit money.

Now, if one were to just enjoy a leisurely tube ride down the river, the ride would take roughly two to three hours, depending on water levels. However, no one goes to Vang Vieng just to tube down the river. Instead, bars blasting dance music and offering water toys and games surround you on both shores, competing for your attention. If you want to come ashore, you simply grab one of the stringed water bottles and the bar staff will reel you in, often offering you free shots of homemade whiskey upon arrival.

What could be a better idea than combining alcohol, drugs and water sports in a country with virtually no safety regulations? 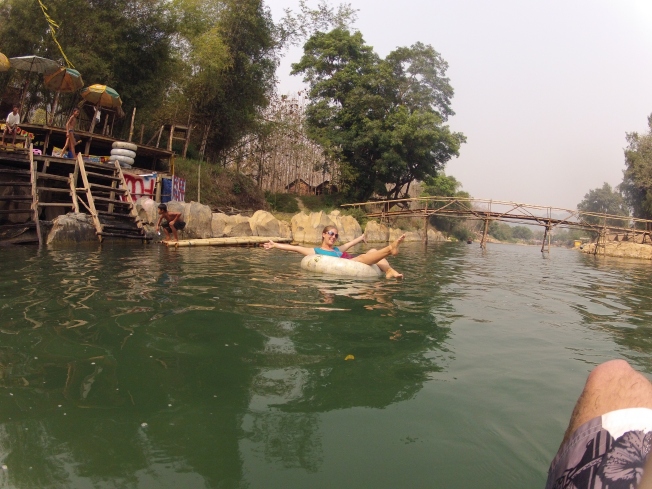 Tubing down the river!

If it sounds a bit dangerous to you, that’s because it is. In fact, several people die or are injured EVERY MONTH while tubing, often due to landing on hidden rocks while jumping in the water or drowning. In addition to sheets and towels, my room at Pan’s Place guest house came with a detailed advice book, which I like to call the “How to enjoy Vang Vieng and Not Die” book, including information on the dangers of tubing, the legality (or technically, non legality) of the drug scene and fun stories of people who have died while tubing. English expat owner Chris also offered up his own advice, such as, make sure you wear shoes.

“Stitches in this town are $7 a stitch, and they don’t use anesthetic,” he told us.

As you can probably gather from my tone, I was not a very active participant in the debauchery. First, as previously stated, I’m naturally not a big party girl. But second, and most importantly, I value my life and meeting St. Peter because I broke my neck jumping onto a hidden rock in shallow water while half out of my mind is not how I’d like to go.

But the reality is, tubing is super fun, even sober!

While I only had one drink throughout my entire journey, I loved visiting the bars, playing mud volleyball, shooting cans with slingshots, and yes, even jumping into the water off a few zip lines. Though I had not originally planned to do this, after watching all three of my travel buddies plus several Laos children swing into the water unharmed, I took my chances. And it was super fun! I did, however, draw the line at the massive “Slide of Death.”

After a few hours of fun, we were determined to actually enjoy the tube ride to the end, which was an estimated two hours further down the river after the last bar (loudly noted, “LAST BAR”). Problem was, thousands of shallow rocks a mere inches underneath us made the ride down more of an uncomfortable walk down, and we eventually gave up and took a tuk tuk back to town.

Altogether a fun experience. Remember kids, if you’re going to get drunk and go tubing down a river, always remember to wear your shoes :).